Showing posts from August, 2005
Show All

August 30, 2005
Speaking of the buenaventurapress I was just checking out their shop and the books they have on offer. They must of updated recently as there's a whole heap of stuff there that I didn't know about. Must get me some... buenaventurapress Also i finally tracked down a name to a printing process. Well it has a few names but check out the site for more info . I want one of these machines!! I think the basic one starts at around $280.
1 comment
Read more

I re-coloured this for the theme using photoshop.
10 comments
Read more
August 29, 2005

I thought I might as well post the comic i do for the grainery news on this here little ol' blog. I'll try not to post it before they come out but some times they do take awhile. I couldn't help add a little colour to this one :)
3 comments
Read more

Well my ‘showing’ at the bean barn is all over but don’t despair I still have some of the Prints available through my catolouge blog for only $25 a piece. I only make a very small edition of these prints (4-10) so they are starting to thin out now. I’m currently working on some new ones which I’ll add later.
1 comment
Read more

August 22, 2005
I tried to google for this address (isnot) to no avail, but then came across it by accident. I'll have to go back later to the site. I saw the most recent one and the tim danko one and they were kicking. Love the concept. Hopefuly people follow and make their own versions.
8 comments
Read more

August 19, 2005
Got that Johnny Ryan address wrong is the previous post it’s actually johnnyr.com. Check out the shop for some cool goodies. I’m going to have to get me one of those pouches, http://www.johnnyr.com/shop/index.html check out the rest of the site for more fun.
Post a Comment
Read more

So this is what all the cartoonists have been up to, busy contributing to anthologies maybe. Well this looks like what I’m hungering for. Also there was another one on the site that sounded good, ‘Beg the Question’ I think I’m going to have to start shopping somewhere other than Minotaur for comics if they don’t start getting new stuff in. Although I did see copies of that mineshaft mag I came across on the web recently for $15 but I was on a tight comics budget so maybe next time. From the Fantagraphics website: MOME 1 For the new millennium, there is Mome. Designed by acclaimed designer and cartoonist Jordan Crane, this quarterly book will spotlight a regular cast of a dozen of today’s most exciting cartoonists. Though virtually every cutting-edge literary journal these days has flirted with comics, Mome is the first all-comics literary anthology. Like R. Crumb’s legendary Zap anthology, Mome features the same collective of artists every issue, allowing the artists and audience to
3 comments
Read more

August 15, 2005
I did this comic for a local newsletter. Although I think the copy I gave them had a panel out of order and is probably really confusing...It's all because I'm now doing each panel on a separate piece of paper instead of the one page. I'm doing this so I have more editing flexibility. So here it is, Grainery comic
Post a Comment
Read more

Just after I was saying about the lack of comics lately Mandy Ord's Two new comics 'Nana Shower' and 'Nosebleed' come to the rescue. What can I say, I really love her work she's one of the best Aussie comics artists doing work at the moment. Superbly written and drawn. Good work Mandy!
1 comment
Read more

August 15, 2005
Had some tiome to go through some IF entries found this site , which I really liked. kaelagraham Steve Mack annika sandin stockholm illustration
Post a Comment
Read more

August 14, 2005
Went to melbs on the weekend which was propbably the best trip I've had in years. Got to wander around the city on Sunday. I know city people laugh at country people such as myself but it realy can be such an intoxicating feeling taking it all in. Went to Minotaur, and idin't really see anything new as expected. Although i did pick up the new palookaville by seth which I've been meaning to get for awhile, and my own copy of Mandy ords 'Dirty little creep' (We had bought one but as a gift for someone)
2 comments
Read more

And yes there was no mail in my pobox...boo hoo! I Feel like I'm on a desert island at the moment. Anyway I thought I'd post this panel to show you this new brush technique I mentioned. I couldn't help but give it a little touch up in photoshop... ps- quote by Charlie Brown
4 comments
Read more
August 09, 2005

These are the little cards I've put out to prmote the showing at a local coffeee shop in Ballarat called the Bean Barn. It's only on for two weeks so if you're in the area get your booty down there! The showing is entirely made up from these digital prints Ive been doing recently.
1 comment
Read more

August 08, 2005
This is another site too . Nothing in particular I just like the craftiness of her things. And speaking of dolls, I couldn't help myself. I took my daughter to spotlight (Material & craft store) after coming up with our own designs based on the ugly dolls (in previous link) we picked up a bunch of felt and started cutting and sewing. I've done a fair bit of hand sewing before so that's how I was going to do these. But then I thought why make it hard. So I guess I'll machine sew them. Hopefully I can post some pictures when we're done.  Also been working on some new comics which I'm pleased with, my new technique with a brush is coming along. The drawing seems a lot more natural. Plus I'm working on panels individually instead of whole pages. I'll probably composite them later on Photoshop as needed. My next Scrambled comic is going back to A6 format also. I'm hoping to have something to print in 3-4 months. I’d love to do it sooner but I’m rea
3 comments
Read more

August 06, 2005
As I said in some previous Blogs, y mind has been taking some interesting creative turns lately, not really sure why but I’m happy to follow them along for the ride. I’m full aware of the tendency of the mind to want distractions, so I’ll be careful not to jump at everything that comes to mind and my number one creative outlet I would still have to say is comics. But just to give you an example of some things…Lately I’ve been fascinated with people who make the own little dolls and such out of fabric (I’ve made a few sock monkeys in my time) or other such crafty things. Also I’ve been getting urges to make things out of paper Mache’…I tried to make a small guy a couple of years ago with chicken wire, it never worked. But then in an art history lecture on death the other day I saw a slide of a day of the dead skull all painted up. Plus I think I’ve converted to using a brush instead of a nib! This may sound small but to me I’ve always divided up comic artist between those that use brush
7 comments
Read more

Like I said lasty post I've really been craving some new material. especially from people like Joe Matt! Doing a google search this is all I could dig up was the photo taken by a fan at a convention. They say that he's living in L.A helping out with the production of a cartoon based on his work by HBO... Amyway this drought is having a postive effect on my work as it's giving me an urge tio create my own neew comics. Over the last few days I've been working on a new layout and format for my comics and I think I've got some good leads...Anyway I've just recently read that artists should have some sort of containment of ideas until they're ready to be unleashed which I think is true to some extent. So you'll just have to wait and see. With the way things are going at school (Busy) I won't be putting out any comics other than 7 pages for a few months...(Which is not to say i won't be making them)
1 comment
Read more

August 01, 2005
Is it just me or does there seem to be a lull in comics at the moment. I don’t know, maybe my appetite has surpassed the actual available comics out there. Some one else said they noticed Minotaur hadn’t had any new stock for a while. I love living in Ballarat I think the country life suits me in a way, but I also crave a life in a city. One where you can frequent comic and bookstores and keep abreast of things. I have had some shifts in my work recently especially in my comics which has been refreshing, and I’ve also been playing around with the idea of papier mache after seeing a Mexican ‘day of the dead’ papier mache skull all a painted up in bright yellows and reds. Found this helpful resource: http://www.papiermache.co.uk/ Got a ‘showing’ next week at a little coffee shop on Sturt St called the ‘Bean Barn’ so you’ll be able to view these prints I’ve been working on in person. Also the school art auction to raise money for our end of year exhibition is on Wednesday week.
1 comment
Read more 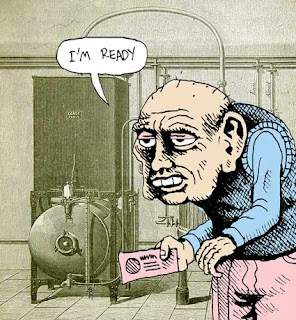