Showing posts from August, 2013
Show All

It was Robert Crumb's 70th birthday the other day so I drew this Melbourne street scene in a crumbesque drawing style. Like many cartoonists I started out being obsessed by Crumb's work and it showed a lot in my early work. I have tried to work away from this and I hope my style today is more my own than anyone else's. Although, it is hard not to look like crumb when you are doing black and white comics with cross hatching. Look closely enough Crumb's work and you can see Basil Wolverton , Thomas Nast , or E.C.Segar .
Post a Comment
Read more 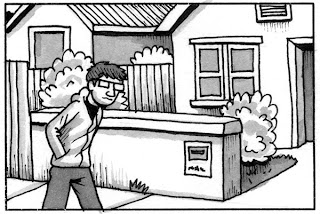 Officially speaking winter is over and it is meant to be spring, but these last few weeks have been wet windy and cold. Today I left work without my winter jacket on, the air was fresh and the sunlight was a nice golden hue. I have been sitting at home doing some homework and staving of my dinner hunger with beer and chocolate, and I feel light and expectant. Perhaps it is that my family get back from their Canada trip next week but I also think it has something to do with not feeling the binds of winter for once. The temperature in the house is mild and I do not feel so holed up in my winter cave. The promise of spring is around the corner.
Post a Comment
Read more 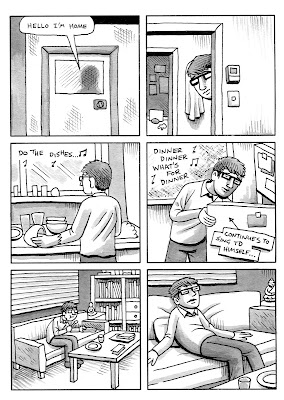 Done for the illustrationfriday.com theme of 'Surveillance' a few weeks back If you are in Australia you can download '1984' eBook for free here  as it is out of copyright
Post a Comment
Read more

On blogging and other things 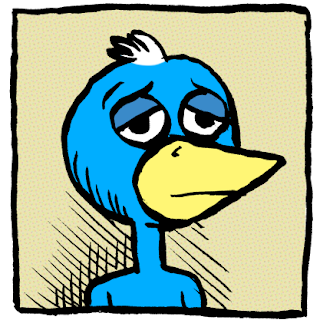 It seems like such a serious thing to write a blog post these days. Out of all the social media options blogging would have to be the most formal, and I tend to shy away from making an official blog post for this reason. Rather I condense what I want to say into 140 characters and post it to Twitter. As for Facebook, I do not use it to communicate much other than share other peoples posts, comment on friends posts, and keep an eye on upcoming events. The other aspect of not blogging, is I have noticed a marked decrease in interaction here. I know people are reading posts, but without any of the 'like' or favourite features or other platforms it can be hard to know people are out there reading. This is a catch 22 though, do I post less because of less interaction or do people interact less due to my lack of posting? I might also add that I had stopped checking my RSS feeds which allowed me to keep up to date with other blogs like mine. Now that Google Reader has ceased, I ha
1 comment
Read more
More posts