July 22, 2010
The problem of contrast and tone.
One of the major concerns when drawing comics or images is that of tone and contrast. This is especially true of B&W drawings but to a lesser degree with colour. It is often referred to as ‘tangency’. When you do not have tangency, the lines that you have drawn blend into one another an become hard to decipher. The image is basically flat and hard to read. 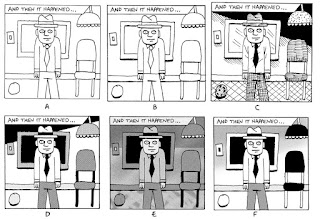 A/ This image doesn’t give us enough information; there is no contrast or line variation.
B/ This is a little better, with some added line width, but still flat
C/ This example is much better, there is line width, hatching and cross hatching, and areas of black. This helps us discern where the objects are sitting.
D/ This example uses screen dots to create a grey tone that gives us contrast. Notice how I’ve placed the black differently in this picture. The picture is a little flatter than ‘C’ but still works. This method could be used for stylistic purposes.
E/ In this example I have gone too far with the grey tones and washed the image out. To me this looks as if it should be in colour. Whilst as an individual picture it might look good, as a comic panel it is hard to read quickly
F/ Once again a different choice of grey areas and black areas still gives us contrast but in a different style. This panel reads much quicker and easier than ‘E’.
tutorial