December 31, 2015
It's been a weird year for me personally but luckily I have been able to continue my drawing practice.

Two major achievements this year for me, were the release of two new comics

George Bloop
This was a comic I started in 2013, but never completed. I resolved to not only finish it but add extra pages and expand the story. While it was not technically my first piece of writing fiction, it did feel like my first attempt at a longer story, coming in at just under 20 pages.

Imagined Mysteries : A Tribute to Leonard Nimoy
I felt inspired to write this after hearing about the passing of Nimoy. Being a Star Trek fan from my early teens I felt I had something to say about Nimoy's portrayal of Spock and our current political climate. 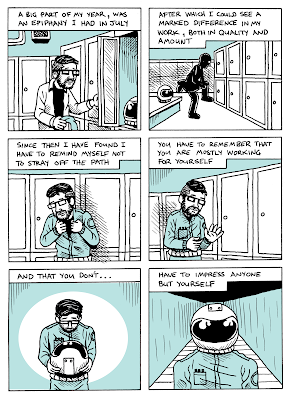 New designs on Redbubble
I've been trying to get some fresh designs up onto my Redbubble account. This shirt is still popular on Redbubble even though I have a new version here and this robot head.

What's next?
I'm going to continue posting drawings online and exploring different themes. I'm hoping that maybe a story will emerge from these doodles, but if not I can just enjoy them for what they are. I'm hoping to get a new comic out this year, I'd like to do something in B&W, maybe even something in a series. One of the things that took me so long to publish Imagined Mysteries was the colouring process. I feel a bit stuck with my comic writing at the moment. I'm going to have to design some small challenge for myself to hopefully get around the block (like the one I did above).