What's does a zine mean?

Zine is short for magazine and pronounced ('zeen' not 'zoine'), is a self-published booklet, usually small and given away freely or sold for cost. In many ways, zines defy definition. They're strongly tied to subcultures such as the Punk and DIY scenes, they emphasise a do it your self mentality with a lack of artificial pretences. 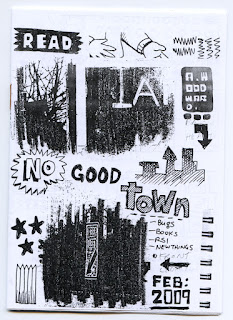 Although a zine doesn't have to necessarily be photocopied to be legit, I feel it is one of the most direct and affordable communication methods that fits with the DIY zine ethos. The rise of accessible photocopier machines correlates with a rise in zine making. Zine-making probably peaked in the '90s aided by a fledgling internet and alternative culture and waned from the 2000's onward from the rise of blogging and social media being the most direct form of similar expression. These days' zines tend to be more fanciful with risograph artwork or screen printed covers and specialty paper. Like some sort of hybrid or artist book and zine.

Like any art form or medium, you will encounter a wide variety of the good the bad, and the ugly. Part of the fun of collecting and reading zines is the challenge of finding good ones. Like searching through old second-hand bookstores, you have to sort through many old dusty western and romance titles to potentially find that one gem.

These days, it's hard to get as excited about zines. Sure there is a nostalgic element and if anyone is bothering to make one they're probably putting in more effort than ever before. But almost non-existent are the established networks of zine distros, zine stores and more importantly zine readers (apart from a faithful few). Like many old technologies, they get celebrated for their faults, cheap paper, mis-registrations, photocopied pasting lines, and photocopier noise. Much like a Polaroid camera, they're still fun and have their own charm, but 99% of photography is made digitally and shared digitally. 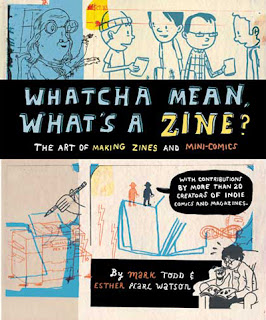 With this in mind, I've thought a lot about where zines stand. Like mentioned, they defy definition. Anytime you try, you just end up feeling silly for limiting something that can take on more forms than you realize. For this reason, I strongly feel that one type of definition we have to readdress is that zines are photocopied onto paper. Sure, a traditional zine is, but what about the essential nature/idea of zine themselves.

For me, I would list some essential aspects of zines as,

It's important to point out that the reason zines resist definition is that they're not about the look and feel or even necessarily the content. Therefore, when I have been working with putting together epubs recently, the hand-coding of them reminds me of the DIY nature of cutting folding and stapling zines. Zines flourished when the medium suited a semi-local audience, and with the advent of the internet, the audience became worldwide, and it's hard to impossible for zines to compete in that area, the high cost of international postage is more often than not more than the cost of the zine itself.

Could epubs be zines? There is certainly such a thing as an 'ezine'. I think it's not entirely absurd to think they are for a number of reasons. What do you think? 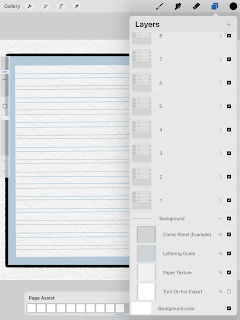 I've been using the handy 'Page assist' feature in Procreate for making comics. A cool aspect of this is that you can use the first layer as a 'background layer'. This background layer persists through all layers, making it perfect for guides or for when you export the final artwork.
Read more