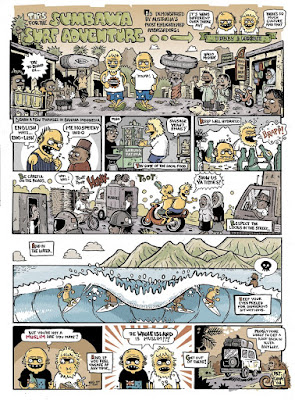 Basically I'm the second kind of writer you outlined. Occasionally I use the story-board method or the stream of consciousness method, and when I do use these I am usually pretty fond of the results, but at heart I'm a prose writer. More often than not I’m drape my graphic work over the top of a pre-prepared scaffolding of prose. I do this because I’ve noticed that a well written ‘voice-over’ is a really fantastic way-in to a comic, particularly for those eyes more schooled in reading text rather than comics. Artist like Joe Sacco, Majane Satrapi, Julie Doucet represent this really important interface between the world of book books and the world of comic books. Reader’s eyes are led through this confusing maze of panels on these stepping stones of more familiar prose. I’m really trying to position my work in this interface by making comics specifically for the people I know who don’t read many comics. I’d rather go to the National Young Writer’s Festival than Supanova. The downside is that if you give lazy readers licence to ‘follow the voice’ instead of the more collaborative reading experience that you get with more comic comics (like Chris Ware of Seth) then lazy readers brush past the artwork that you’ve agonised over. Ocassionally you have to dump little roadblocks in the comic, like a page without words, to get the bastards to slow down.

There’s a school of screenwriting that says it’s really lazy to use voiceovers, that carefully scripted work can communicate anything you need in dialogue. I recognise that this is probably true as an ethos for comics, but to be honest, I couldn’t give a flying fuck. I LOVE voiceovers in cinema. To hell Charlie Wilson’s War and its watertight dialogue, I’m all about the Virgin suicides and it’s husky dream-like voiceover. Blistering prose in boxes, like Rorchach’s in the opening page of Watchmen is for me, what writing for comics is all about.

If I’m making a comic like that: “Last Share House” strip my ideas come as a pretty ephemeral wispy sort of compulsion and I sit down inform of MS word and peck away at the idea until I can see something tangible come together. Mosty I fail. I close the file and never look at it again. Sometimes I’m compelled to open it up again and continue pecking. These are the stories that end up being drawn into a comic.

As I’m pecking I’m keeping and ear out for turns of phrase that have a ring to them and imagining how things will look. As a visual thinker I do the latter automatically. When I’m reading novels I’m constructing little films in my head and the same applies to my writing. As I’m writing, particularly when I’m writing for comix, I’m imagining character design, camera angles and backgrounds and all that. I tend to write as stand alone prose. That is to say, even though I know that I don’t have to describe something because it’ll be drawn later, I do anyway. A sentence like “He was a big fat bastard” doesn’t ever need to be scripted into a comic because, if the comic is well drawn, the character will look both fat and bastardly. These Lines often get cut out right at the last minute when I’m panelling up my page.

The downside of this writing method is that you get carried away and you end up with a 3000 word story that’ll need fifty comic pages to ever be told properly. When this happens I get out the pruning scissors and mercilessly shave off everything that I can. The Last Share House came down to about 800 words, which I made into a 20 page story.

I’ve always intended to thumbnails in planning flow and pacing but I never do. What I do though is rough out the page on the board, rub it out and redraw it again and again. I kind of do the thumbnailing like that, and more often than not, instead of properly drafting I’m resting on the writing to manage the flow. I figure that if it reads ok as prose it’ll be fine. Usually a central image jumps out at me and I start with that as the focus point for the page construction.

I find the working process using this writing method is particularly tedious. The writing process is wonderful, but that’s about 10% of the work. Then laying out the pages and getting the story to fit into the space in harrowing. It takes me forever to draw the first half of a story then the last half comes in a burst. Writing in the make-it-up-as-ya-go mode is never such a chore, it’s tremendous fun, but the results are rarely as long-lasting. For me, the most important of my comics are the ones that are slow boiling catharsis, like the Cronulla story, and this takes guarded careful writing.

One thing that always happens that really frustrates me is that the story becomes fragmented once I spread it over the page and I lose sight of the flow of the piece and the information design. I tweak individual sentences and individual drawings as though they existed alone in a vacuum. Later, when the story is inked and my eyes are fresh, I find all of these changes I made in the drawing process obstruct the flow of the story. As I’m drawing I’m slowly learning to trust the intuition I had in the writing phase and not tweak things.

The text is up for review right up until the last moment. One of the last things I do on a story is get a proofread, then go through in Photoshop making changes and corrections to the text. I always have a million mistakes cause I can’t spell for shit. Just yesterday I caught myself googling to see whether or not ‘alot’ was a word. There’s no spell check when you’re hand lettering.


*****
You can check out more of Pat's comics on his website
patgrantart.com
writing