A pivotal point in my comic drawing practice was when I started art school.

Although I had already self-published comics in a zine format, 7 Pages felt my first true zine. It was the first thing that truly felt ziney. At the time, zines were more common and there were multiple online zine distros popping up. This meant that not only was it a zine, but it also fell into the subcategory of 'perzine' (personal zine).

I used it almost like a touchstone work, as I feel it hit a nerve (both in me and readers) that I base the majority of my comic work on to this date.

In a lot of ways, it was a variety of various factors aligning that made it even possible.

Out of all these things, it was the free photocopier that had the biggest impact.


Because of all of these factors, especially the giving it away in cafés, it created a local buzz. The issues I left in cafés were snapped up within 1-2 days, I overheard people talking about, friends would ask me if I had a new one out. The buzz may have been only small, but it filled my heart and fuelled me to make more. It was the first time I felt a true connection with an audience. This lasted from approximately April to September and roughly about 15 issues. I tried to keep it going after the free photocopying dried up, by paying for my own copies. But it just wasn't the same, it was harder to make, I printed fewer copies and therefore gave less away. It felt more onerous than fun, and I was still a poor student. Looking back I should have been bolder perhaps and found a local business, art org, or a sponsor to put them out, but again the hassle involved in setting that art plus doing art school made it fizzle.

I attempted to recreate the magic by changing the format from one page to a multi-page book. First with Scrambled and then later 7 pages digest. This made sense, as it was too much work to print a one-page zine and then send it out. Much better to accumulate the work into a collection less frequently. 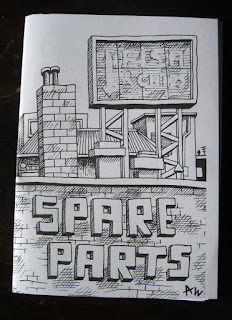 Later I attempted to make a ziney publication again through titles like No Good Town, Construction Pieces, Spare Parts, and later Ramshackle Shacks. These later zines were probably the truest successor to the original 7 pages no-frills zine aesthetic. I have had moments where I could easily have printed up free zines from a working photocopier, but as it would have technically been stealing I never felt comfortable doing it. Probably in the same ballpark as taking a pen home from work, it's not really stealing, but...

More recently I've been wondering (what is 'alternative') how you even achieve a similar mindset and or aesthetic. Can there even be an alternative scene? What does it even look like? This is why I think the perhaps epubs could be the spiritual successor for zines. I can freely and easily make them (near to zero cost anyway) and even distribute them online for free (near to zero).